Brett and I tried a new recipe out of Elie Krieger's The Food You Crave. Of course we adapted it to be vegetarian, which just means that we swapped chicken broth for vegetable broth and left out the chicken. We also left out the celery because Brett does not want celery anywhere near his food.
I sauteed some chopped onion, carrot and fresh thyme in some olive oil until the veggies got tender and then I added all of the broth. About one minute later I realized that I wasn't supposed to add all the broth so I dipped a measuring cup in the pot and then strained it into another measuring cup. Oops!
Orzo is great! I'd only had it a couple of times, but I had never cooked with it before. It looks like rice, but is actually pasta. I poured some orzo into the pot and let that cook.
When the orzo was almost done, I took that reserved liquid and heated it up in the microwave. Now for the weird part... I beat an egg, whisked in some lemon juice, and then gradually whisked in the hot vegetable broth to temper the egg. This mixture got added to the pot of soup and acted as a thickener. Just make sure that the soup doesn't come to a boil. 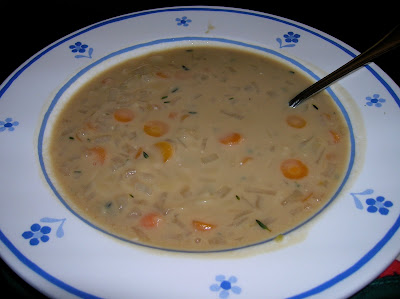 Admittedly, it is not the prettiest soup in the world (although Elie Krieger's is quite lovely.) I think that the brown vegetable broth instead of golden chicken broth kind of ugly-ed this dish up. But to me, all that matters is the taste, and it was anything but "tan"! The main flavor was lemon, but I think the fresh thyme is what really made this soup wonderful. The orzo also gave great texture. Yum! We liked it so much that we decided to make it again the next night for my parents who came all the way across the country to see us! And we will definitely be making it again in the near future.
Posted by Kim in the Kitchen at 6:51 AM No comments:

We're trying to eat more vegetables. It's a constant battle for us because we want to eat healthy but we just don't really like vegetables. I've been that way my whole life. I remember as a kid I would eat broccoli, but only if it was absolutely doused in melted Velveeta "cheese". Don't even get me started on Velveeta. Any cheese that doesn't need to be refrigerated and can be found on the cracker aisle, is not cheese.
We've also been watching Jamie Oliver's Food Revolution and got a HUGE kick out of last week's episode when the school district's lunch nutrition enforcer declared that even though there were 7 different vegetables in his veggie noodle stir fry, he needed more vegetables on the tray, and then she suggested adding some french fries to reach the vegetable quota! French fries are not vegetables! Potatoes in general should not count as vegetables; they are a starch and should be placed in the same category as breads and grains. At least that's how we view them... and we are not experts.
All that talk about potatoes made me hungry for them (that should be another clue that they're not a vegetable!) I've had bad luck with baked potatoes in the past, but I decided to go with a new method that I found in Rachael Ray's Veggie Meals: poke them with a fork and microwave for 8 minutes. Then wrap them in foil and throw them into a 450 degree oven for 20 minutes. This method worked beautifully!
While the potatoes were baking, I whipped up the broccoli by steaming the florets in 1/3 cup of water for 5 minutes. It also turned out beautifully!
Last came the cheese sauce. I melted 1 T of butter then sauteed about half of a small onion (the recipe called for a shallot) until it was soft. Next I added 1 T of flour, then I added 1 cup of veggie stock and let it thicken. Finally, a HUGE gob of grated cheddar cheese made it's way into the pot. The steamed broccoli gets stirred around into the sauce and then it all gets poured over the split baked potato. 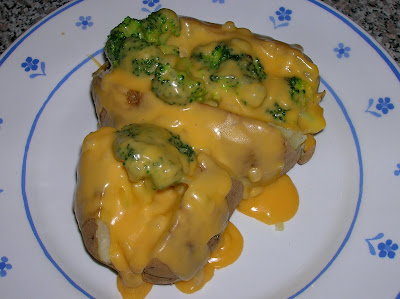 I loved these potatoes. Yes, it is an unsettling amount of cheese... but at least it's not Velveeta. And there's broccoli in there! I even ate the skin of the potato, which I usually don't do... that's how amazing this sauce is!
Posted by Kim in the Kitchen at 6:11 AM 1 comment:

One time when we were at Brett's parents' house, Brett's mom passed out some cookies that did not have the fork criss-cross in them. They were tasty and obviously peanut butter cookies and so we all laughed when Brett's dad said something along the lines of, "These are good. What kind of cookie are they?"
"Peanut butter!" We replied.
"But they don't have the criss-cross!" We thought it was funny that the criss-cross is so closely associated with peanut butter cookies that if a cookie doesn't have it, it must not be peanut butter!
This is a super classic recipe that everyone can instantly recognize mainly because of that fork-pressed criss-cross. Brett practically lives off of peanut butter, so of course he loves these cookies.
Since we are on a big maple syrup kick, I decided to substitute 1/4 cup of sugar with 1/4 cup of maple syrup. I instantly regretted doing this because real maple syrup is not cheap, and the peanut butter totally (obviously) is the star of the show. The maple flavor was lost in this batter.
As I was making these cookies I was trying to talk to my mom at the same time and actually forgot to criss-cross one batch. Do they still look like peanut butter cookies to you? 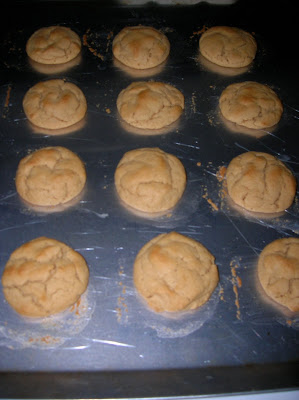 No? Perhaps these then: 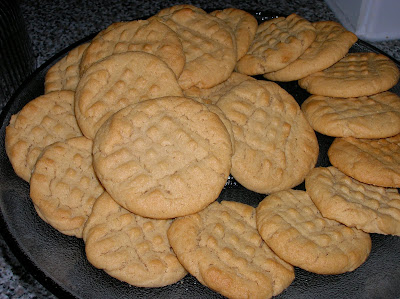