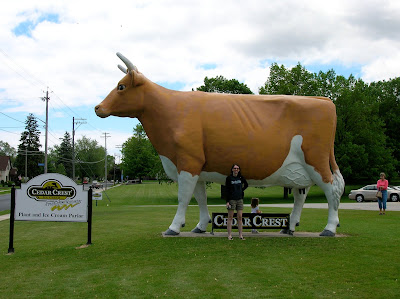 I've been wanting to try being a vegetarian for a couple of years now and we are finally doing it... starting Wednesday. We have some meatballs in the freezer that we need to get rid of first.
I think we've gradually been heading in this direction because we stopped eating beef a long time ago, we don't eat meat every night, and we rarely eat big hunks of meat. This choice does eliminate a few favorites from our meal rotation and calls for some substitutions in others, but I think we can do it.
There are many reasons why people become vegetarians, but for me it is the mistreatment of farm animals. When I read Animal, Vegetable, Miracle last year my eyes were opened about the treatment of mass-produced turkeys. Turkeys are bred to have huge breasts, but they get so huge so fast that they can't even mate naturally. Similarly, chickens (as I saw on Oprah recently) get so big so fast that their legs can't even hold up their bodies, so they have no choice but to just sit in their own filth.
Cows are a whole different, horrible story. Right now I'm reading The Omnivore's Dilemma (which I will post about when I'm completely finished) and I just finished the chapter on factory farms. I knew it was bad, but I had no idea how bad. The cows are forced to eat corn when their bodies are naturally evolved to eat grass. This makes them sick, so they are also fed antibiotics. The herbivorous cows are also sometimes fed beef tallow (for fat) and chicken, pig, and fish meal (for protein.) They also stand and sleep in huge piles of their own waste. I could go on, but I won't. If there's anything I could encourage you to stop eating, it would be corn-fed beef.
We are still going to consume milk, cheese, and eggs, which has got me feeling a little hypocritical because I know some of those animals are mistreated too, but I can't give up those things. We've agreed to buy free-range eggs and become more aware of where our milk comes from and how those cows are treated.
I'm viewing this as a fun, new project and I'm hoping that it will work out. If you have any tips on being a vegetarian I would be happy to hear them! One great thing is that this choice won't interfere with dessert!
Posted by Kim in the Kitchen at 7:00 AM 4 comments:

I love it when I find a recipe that both Brett and I agree is a keeper. I found this recipe in the latest issue of Simple and Delicious magazine and they aren't kidding around; it really is simple and delicious!
I halved the recipe, but I will include the whole recipe here.
Cook rice.
Mix 1/2 a cup of orange juice with 1/4 tsp of cornstarch, 1/4 tsp of salt, and 2 T of fresh torn basil.
Saute 1 lb of raw shrimp (I took the tails off for faster consumption) and 2 cloves of garlic in 1 T butter and 1 T olive oil.
When the shrimp turn pink, stir in the orange juice mixture and let it thicken for about 1 minute. 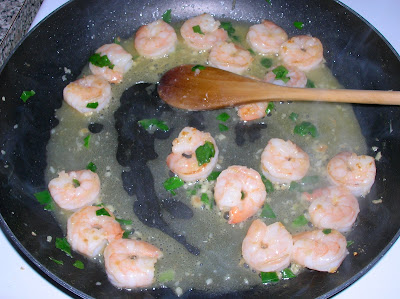 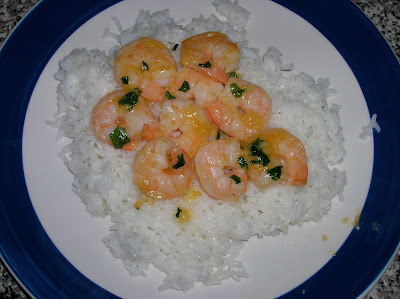 Sooooo easy! All that probably took 10 minutes. And the best part is that it's really yummy. I've never really enjoyed fresh basil all that much, but it was fantastic in this. The orange flavor was very subtle and the garlic is so good. We will definitely be making this one again.
Posted by Kim in the Kitchen at 6:53 AM No comments:

Foolin' Around in the Kitchen is officially two years old! Thanks to everyone who reads my little blog!
In celebration of my "blogiversary" and Valentine's Day, I made a Sour Cherry Coffee Cake from Martha Stewart's Baking Handbook. This recipe has several steps but turned out very tasty.
I mixed up the batter and poured half of it in the bottom of a greased angel food cake pan (or as Martha calls it- a tube pan.) Then I placed cherries on top of the batter so that none were touching the pan. The rest of the batter went on top of that. 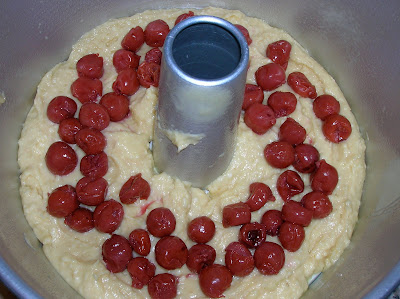 Then I had to make the streusel topping which turned out to be a little more complicated than I anticipated. Martha only includes a recipe that will make 4 cups of streusel and I only wanted 1 cup, so I had to fourth everything. You all know how sometimes halving things can go badly in my kitchen, so I made sure to write everything down. I ended up with some eighths and sixteenths but all in all it went well.
I sprinkled the streusel on top (it seemed like way too much but I went with it) and then put it in the oven. When it came out of the oven it was not done, so I let it go five more minutes and it still wasn't done, so I let it go four more minutes and it was good enough. I declared it done.
After cooling for 15 minutes I inverted it onto a cooling rack with a baking sheet underneath just as Martha prescribed. Martha's a smart lady. Probably half of the streusel came off when I plopped the cake upside down onto the cooling rack. Then I carefully turned it back over with my hands. 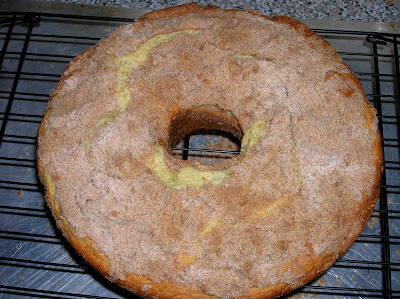 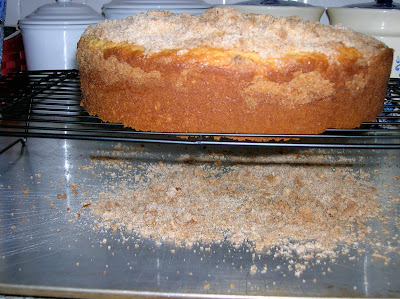 I couldn't let all that topping go to waste, so I tried to scoop it up and put it back on top.
When the cake was completely cool I mixed up some milk glaze (1 cup powdered sugar and 2 T milk) and drizzled it all over the cake. 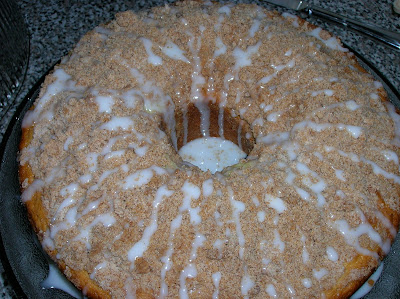 The cake was very good! I was a little worried about those cherries being too tart, but the cake is so sweet that it balances it out. The cherry bites are my favorite. 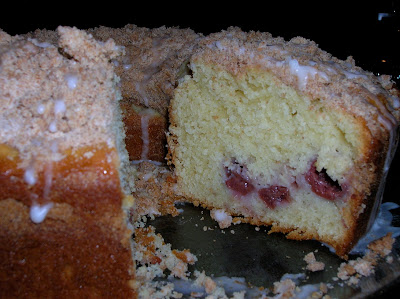 Posted by Kim in the Kitchen at 7:02 AM No comments:

Brett and I used to make pancakes all the time back in college. I pour and he flips. It's a great way to start the day. However, as much as we love breakfast foods, we rarely make them for breakfast. This was more of an afternoon snack for us.
This recipe is mostly based on a recipe in the Jan/Feb issue of Simple and Delicious magazine except that I refuse to use "complete pancake mix." I mixed up our usual pancake batter and added a little cinnamon while Brett grated up a Granny Smith apple to add to the batter. 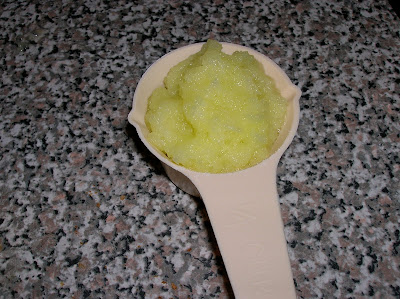 Then I got to work on homemade syrup. This stuff is incredible! You've got to try it! In a small saucepan combine 1/2 cup sugar, 1T cornstarch, 1/8 teaspoon ground cinnamon, and 1/8 tsp ground nutmeg. 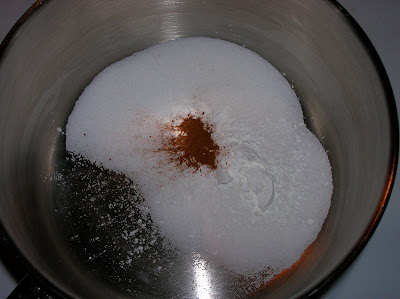 Then add in 1 cup of apple cider (preferably not expired) or apple juice. 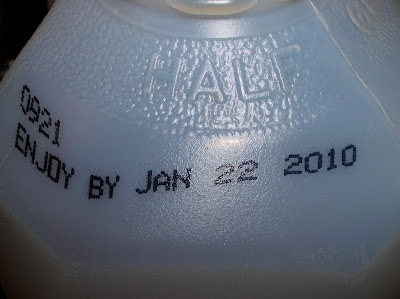 Can you believe they still had this on the shelf? I bought it on Feb 1! I didn't even think to check the date on it. No wonder it tasted a little off. Live and learn. 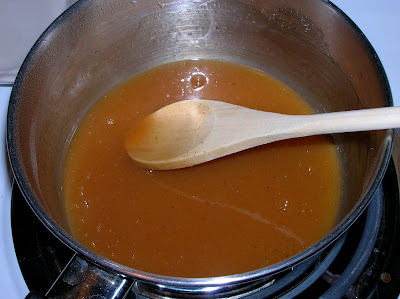 Stir until it's all mixed and then turn on the burner to medium and keep stirring. When it's thick and bubbly turn the heat down to low, stir for a couple more minutes and then add 2 T of butter and 1 T of lemon juice. I kind of goofed up and added those last two ingredients immediately after lowering the heat and it didn't seem to matter. When the butter is all melted, remove it from the heat and let it sit while you cook the pancakes. 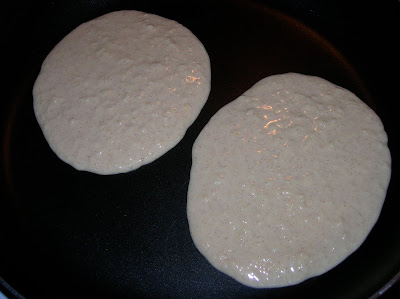 The grated apple gave the pancakes a mushier texture. Brett and I both agreed that next time we would just make regular pancakes. There's no need for the grated apple. The syrup is what makes these pancakes awesome! 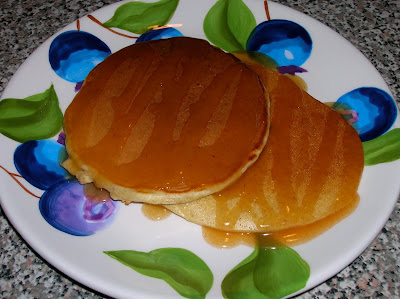 I poured the syrup into a liquid measuring cup so we would have more control over pouring. I do have a fancy little syrup pourer somewhere in the storage closet. Maybe next time I'll think ahead and get it out.
This one is definitely a keeper!
Posted by Kim in the Kitchen at 8:14 AM 2 comments:

A while back I received a cute little cookbook called "Easy Desserts". Upon glancing through, I noticed that there were a lot of recipes that called for vanilla bean, so I promptly added vanilla beans to my Christmas list. Like saffron, that falls into the category of, "It would be nice to have, but I'm not going to buy it." Brett's mom (again) indulged my eccentric wish list.

With a tube of vanilla beans in my hand, I went through the cookbook again and found a beautiful picture of creme caramel. I call it flan. Or at least that's what the picture looks like to me. Maybe they are completely different (which would explain a lot.) Brett and I love flan. We ordered it regularly at El Torito where, we believe, the best flan on Earth resides. (We have tried more "authentic" flans but have a special place in our hearts for El Torito's version.) Unfortunately the nearest El Torito is 3,000 miles away now, so we attempted to make our own.
I split the vanilla bean and scraped out the seeds and put everything into a saucepan of milk over medium heat. 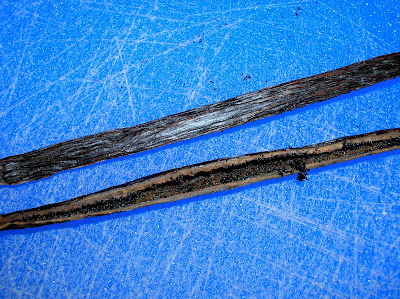 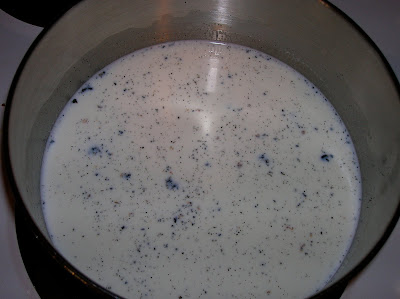 I cracked five eggs and put Brett in charge of the caramel sauce.
Here is where I have a problem with "Easy Desserts." I think they left important information out of the recipe to make it appear easier. There were very little instructions about heating the sugar, water, and salt. No temperature. No high/medium/low heat instructions. Simply a color: "deep caramel color". It says to take it off the heat when it reaches this color and wait until it stops sizzling. We quickly realized that if we waited till it stopped sizzling it was going to be totally burnt. So Brett just poured the sizzling REALLY deep caramel colored liquid into the custard cups. He also poured boiling water into the baking dish for a water bath. 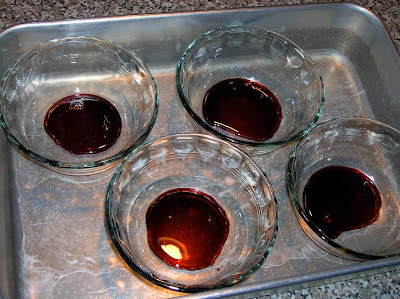 I added some sugar and salt to the milk mixture and then gradually whisked it into the eggs.
Brett poured the custard into the custard cups and then we baked them. 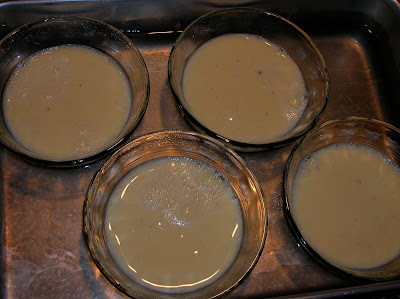 Again there were some missing instructions. We weren't sure what to do after baking them. All the recipe said was "serve at room temperature." We opted to remove them from the water bath and let them cool on a cooling rack.
They smelled great so I ate mine before it came to room temperature. I cut around the edge and flopped it onto a plate. It was not centered at all. 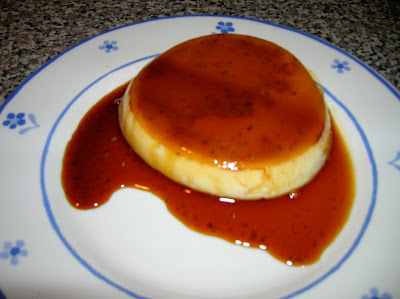 Brett got his in the center, but it caved in somehow. The tasting was jarring. The caramel sauce looked perfect, but was way too bitter. Overdone. Near burnt. I poured my sauce off into the sink and focused on the custard. Brett followed suit. The custard was a little eggy. And despite all of that precious vanilla, it was bland. It needed to be sweeter.
We looked at the six custard cups left and briefly discussed throwing them out. Instead I covered them with plastic wrap and put them in the fridge. They were not at all a satisfying dessert like we had hoped, but they were edible.
The next day, I was surprised to find that they were much better cold. Again, not really a satisfying dessert, but better.
I can say definitively that we will never make this dessert again.
When all the little custards were gone I indulged Brett's request and made some wonderfully sweet and satisfying chocolate chip cookies. 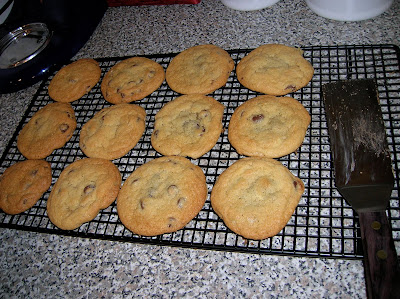