I cannot believe I have not shared this recipe yet. It is quite possibly the easiest dessert ever and it is also one of my all-time favorites. Brett and I have been making and enjoying this since our college days. My Aunt Nancy blessed us with this recipe a long time ago, and I will be eternally grateful... I am not exaggerating... it is that good. THANK YOU NANCY!
Blueberries were in abundance and on sale this week, so of course I immediately thought of Blueberry Crisp. Here are the ingredients: 20 oz crushed pineapple, 3 cups (at least) of blueberries, 1 box of yellow cake mix, 1 stick of butter, and 1/2 a cup of sugar. (Pecans are optional... Nancy always opts yes, I always opt no... either way it is delicious.) 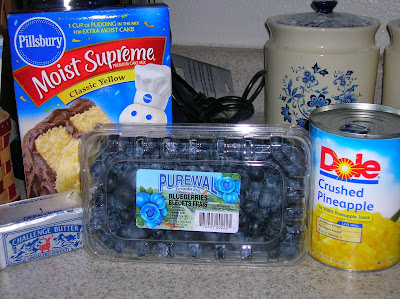 Layer in the order given. Pineapple first- juice and all 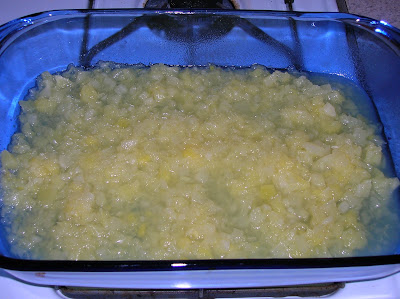 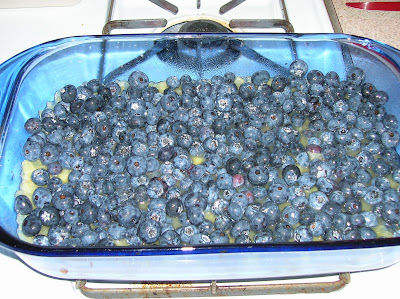 Then dump the dry cake mix on top of that. It is weird the first time you do it, but trust me it is awesome. I think the technical name for this kind of dessert is "dump" cake because you just dump the cake mix on top, but I don't think that sounds very appetizing. 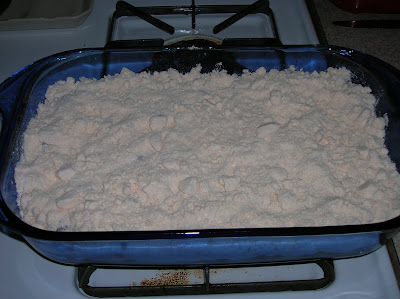 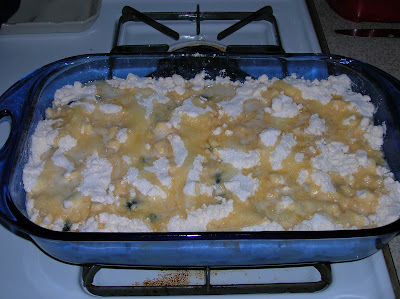 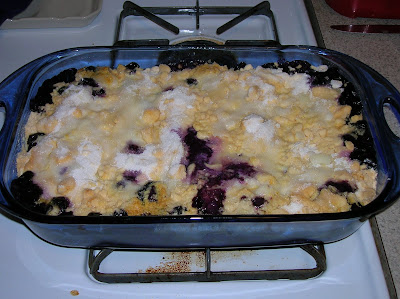 And then eat it. I don't think too highly of raw blueberries, but I must say that when they are cooked, they are among my favorite fruits. Even though this dessert is not the prettiest thing in the world, it packs a major punch in the taste department. 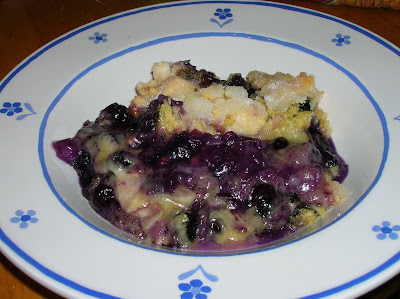 It is also wonderful the next day. We like to reheat individual servings in the microwave and then crack through the crusty top layer with a spoon and mix it all around. Brett even claims to like it better the second day. 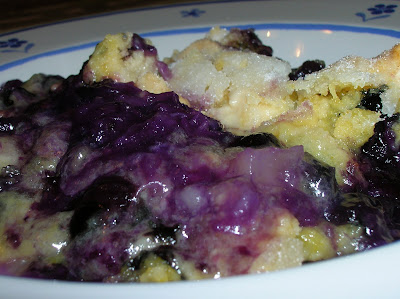 Brett and I spent the past week visiting family in Chicago. It was a wonderful trip! We got to meet our brand new nephew, Jack.
We also went to a Cubs game at Wrigley Field! If you ever get an opportunity to see a game at Wrigley Field you should go. Not only is it beautiful and historic, but it has the buzz of true baseball fans who know when to cheer without a big screen telling them to "Get Loud!" Here I am returning from the concession stand with hot dogs for all and peanuts for Brett's mom. 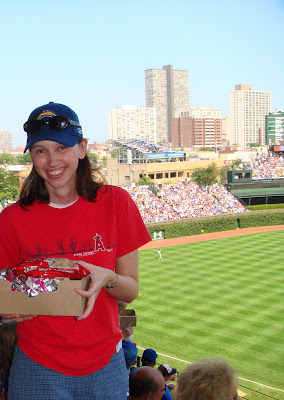 We also went to the fantastic Harry Potter exhibit at the Museum of Science and Industry. If you love Harry Potter, you would love this exhibit! Do you recognize the Weasley's flying Ford Anglia? 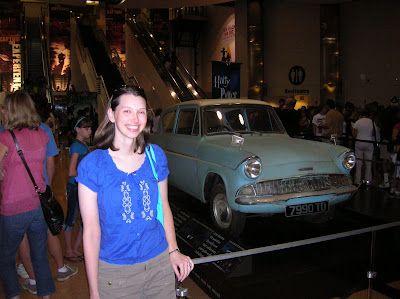 Since this is a food blog I thought I would mention the drastic change in my eating habits when I am in Chicago. It can be summed up in one word: MEAT. I ate two hamburgers, a hot dog, a steak, sloppy joes, a pulled pork sandwich, lasagna, and more. The food was great (I highly recommend Ditka's Restaurant) but it was way more meat than I am accustomed to. Upon arriving home I planned an almost entirely vegetarian menu.
Posted by Kim in the Kitchen at 9:32 AM 1 comment:

It had been a while since we had last used our pasta roller and we decided it was time. I remembered one of my mom's favorite dishes from The Old Spaghetti Factory: the famous spaghetti with mizithra cheese. If you search for it on the Internet (as I did) it turns out that everyone loves that dish and has tried to come up with their own version.
Well, the first thing to go wrong was that I couldn't find mizithra cheese. I went to four stores and had zero luck. I had read about someone using Dubliner cheese instead, so that's what I went with.
I got out the semolina flour and looked at the recipe. We wanted to use half semolina and half regular flour and we also wanted to half the recipe. Sound like an "oops" waiting to happen? Well it was. So I measured out one fourth of the semolina and then added another fourth of regular flour. But then I proceeded to fourth the rest of the recipe too when I was supposed to half it. I realized just in time for the last two ingredients, but didn't realize the biggest mistake of all. 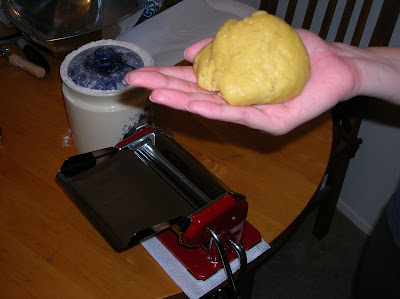 I kneaded the dough like crazy, it was very elastic, like the recipe indicated. When it came time to roll it out it was an absolute disaster. It would not roll through! We had to push it between the rollers and when it finally came out the other side, it cracked and broke. The dough was just so dry! After the third time through the roller (you're supposed to do it ten times before you start thinning it) I started suggesting that we throw it away and use dried pasta. I'm way less stubborn than Brett (but still very stubborn.) Brett tried adding a little bit of water to his hands, but it did not help at all. Finally he asked, "Are you sure you halved everything correctly?"
"Yes, I halved everything correctly!" I said as I glanced over the recipe. And I wasn't lying, everything had been halved... and then some. Visions of the custard cup I had cracked the egg into danced in my head. I had halved that egg by eyeballing it... Brett had scrambled up the other half as an appetizer... oh no... the recipe calls for 2 eggs... so half of that would be one egg. I confessed my dinner ruining mistake and put a pot of water on to boil for the dried penned I had in the cupboard.
I was so mad at myself. We should know by now to write out the halved recipe, because we've messed up before. Brett threw the dough in the trash, I sulked and pouted for a few minutes, and then we got to work on the brown butter sauce. Melt butter, let it brown, slowly pour the liquid off over a seive (in case any solids get out.) It was very easy. Much easier than making pasta. 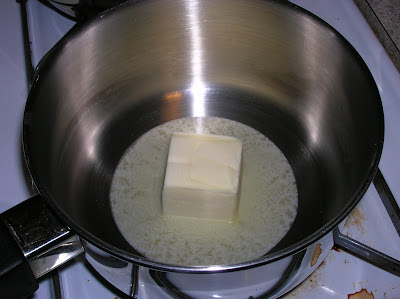 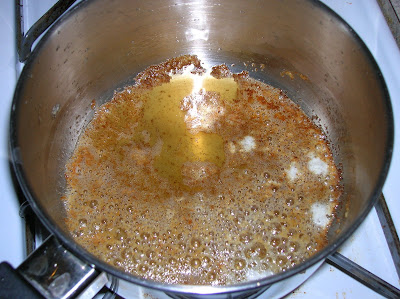 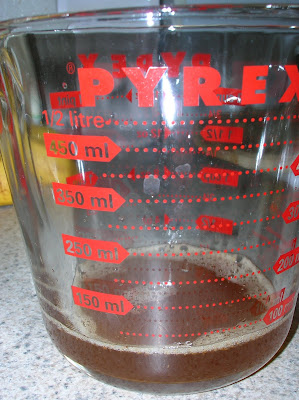 We coated the pasta in the brown butter sauce and tasted it before adding the cheese. "It reminds me of something," Brett said, trying to figure it out.
"Caramel!" I exclaimed, immediately recognizing the warm sweetness.
It was a little weird at first, but with the cheese on top, it was pretty delicious. 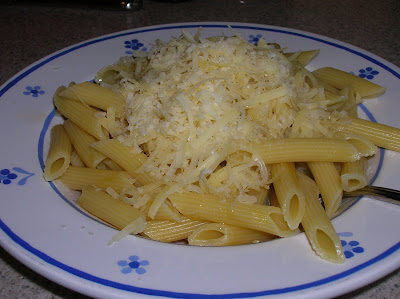 So our original plan totally went down the tubes, but it turned out to be a tasty dinner anyway.
Posted by Kim in the Kitchen at 10:21 AM No comments:

I make pizza dough. That is my yeast specialty. Every other yeast bread we've made has been spearheaded by Brett (with the exception of flat bread, which tasted suspiciously like pizza dough.) So I was feeling brave the other day and decided to make my own non-pizza yeast bread. I got out Brett's Taste of Home Baking Book and picked out a recipe that sounded delicious and looked fun to eat: Garlic Bubble Loaf.
I carefully measured the milk and added the little bit of water that the recipe called for, and then heated it in the microwave stopping often to check the temperature. I've learned to be meticulous about the temperature of the liquid because that's what gets the yeast going! If it's too cold nothing will happen and if it's too hot it will kill the yeast and, well, nothing will happen. Pizza dough starts out with yeast, sugar, and water because (I realize this is not very technical) the yeast needs something to eat. So I just assumed that the yeast would get the sugar from the milk. I didn't read the recipe very carefully because I was supposed to dissolve the yeast in just the tiny bit of water, not the milk too. But I like my way better, and it turned out fine:)
Mixing the dough and letting it rise for an hour went perfectly, so I punched the dough down (so fun!) and divided it up into twenty four pieces using our bench scraper, which really is a fantastic tool. 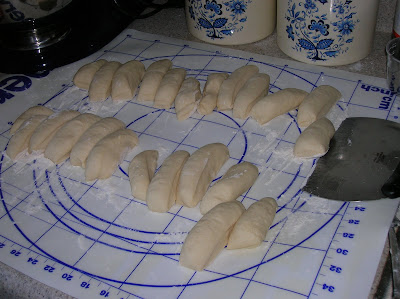 I tried to roll each piece into a ball, with minimal success. I'm sure if Brett had been there he would have insisted that I spend more time making perfect spheres, but he wasn't, so I didn't. Then I mixed some melted butter, dried parsley, and garlic powder for dipping. Unfortunately most of the garlic powder just sunk to the bottom. I wonder if I had been more patient if it would have eventually dissolved. Next time. Towards the end of dipping I ran out of butter and was just trying to soak up whatever I could from the dish. Anyway I dipped each ball and then placed them into a greased loaf pan. 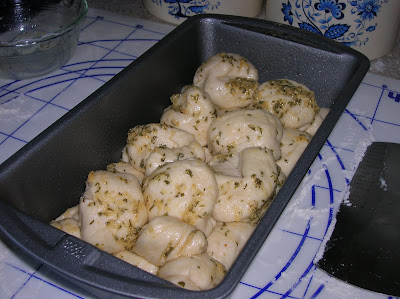 I covered that up and let it rise again. 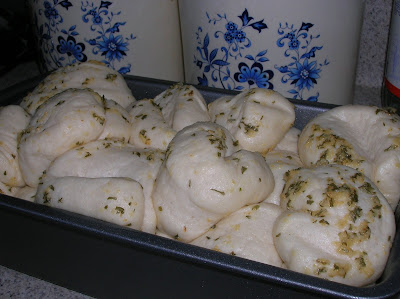 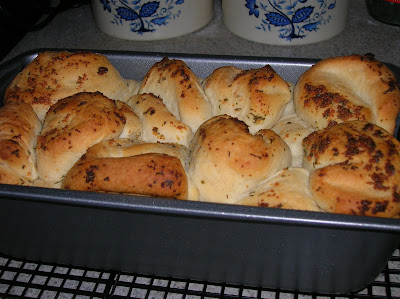 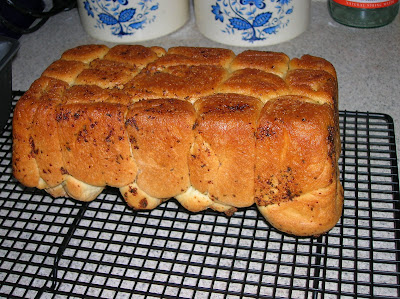 And I pulled a ball off for eating! This would be great for a big family-style dinner because there is no need to slice the bread. It just neatly pulls apart. 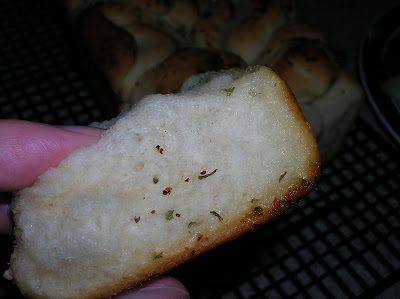 It was delicious and I was so proud of myself. Brett said that maybe I should be in charge of the bread baking from now on, but I will not let him relinquish his crown just yet.
Posted by Kim in the Kitchen at 9:51 AM 3 comments:

This past weekend was one that we had been looking forward to for months and it did not disappoint. Some long time friends of ours got married! The wedding was beautiful, the food was awesome (six types of cake!), and we got to see a lot of friends that we hadn't seen in a while. One of the things I love about weddings is seeing all the family and friends (many of whom have never been in the same room together and have come from great distances) convene for one evening of support and celebration for the bride and groom. It's wonderful! So, for probably the zillionth time, Congratulations!
Now for a breakfast as sweet and comforting as a good marriage (how's that for a transition?)
As many of you know, Brett and I like to eat breakfast for dinner on occasion. Last week we were all set to have traditional Baked French Toast when I decided to spice things up a bit. I found a recipe in the Bon Apetit- Fast Easy Fresh cookbook for Cinnamon French Toast. What was funny was the soaking liquid was almost exactly the same (6 T milk, 3 eggs, 1T sugar, 1/4 tsp vanilla), with the addition of 2 tsp cinnamon. I let the sliced french bread soak for about an hour, which I think made some bites soggy. Next time I will let it soak for less time.
Baking french toast is so easy- the oven does all the work. For cooking it in a buttered skillet I had to actually pay attention. The recipe said about 3 minutes on each side over medium heat, but it turns out you should not trust a timer. Mine got a little toastier than I like, but not burned (thank goodness!) 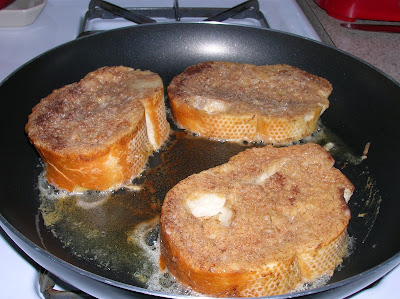 To finish, top with some powdered sugar, more cinnamon, and maple syrup. We both liked the cinnamony zip that the french toast had, so we'll be sure to make this again. We still love our regular french toast too, so maybe we'll alternate:) 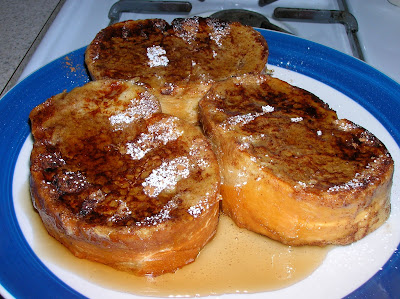