In a previous post entitled “Candy” I mentioned that I don’t need “fancy pants chocolate.” This is still a true statement, but fancy pants chocolate can certainly be fun every once in a while. This past Sunday I had the privilege of attending a tasting at Eclipse Chocolat in North Park. My friend of Adventures of an Amateur Foodie fame (the one who inspired me to start my blog) invited me as her guest to this food bloggers event. I was quite honored to be her guest and to meet fellow San Diego food bloggers. I had a great time just visiting with everyone, not to mention eating lots of yummy food.

I mustered up my courage and really branched out at this tasting. I first tried a sample of blackberry sage dark chocolate, which after my horrible experience with sage brown butter I was extremely wary of, and enjoyed it! I could taste the sage, but it didn’t overpower the chocolate which I loved. 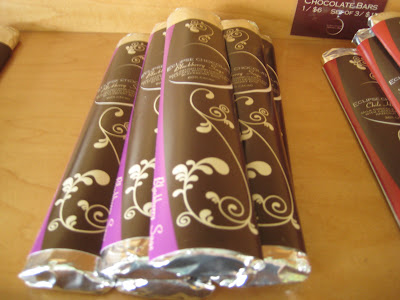 Next I sipped on a lavender/ vanilla bean lemonade while I waited for my tasting platter…fancy huh?! My first sip just tasted like lemonade…I will admit my palette is not highly trained…but after a few seconds I could taste the lavender seeping through. The vanilla bean was completely lost on me, other than the little black specks in the lemonade. Overall it was refreshing and enjoyable (and also the only thing I had to pay for.) Also the straw is an eco-product made from corn! I never would have guessed. I’ve heard of these types of products, but this is the first time I’ve used one, so that was exciting too! 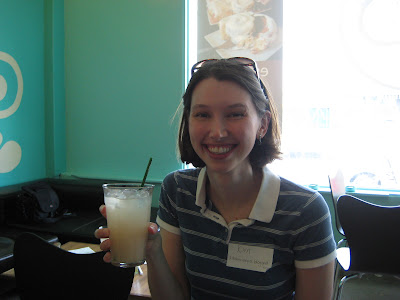 Right before my plate arrived, samples of a spicy chocolate ganache were given out. It was funny to watch the wave around the table as people popped them in their mouths, and gradually felt the punch of spiciness that hits a few seconds after chewing. It was the perfect amount of spice for me, and I think this was one of my favorites of the day.

When my plate arrived, I went straight for the frozen chocolate mousse. Thankfully mine was made upside down, so the berry merlot goo was on the bottom and I could eat just the chocolate part. Other folks were saying that it was kind of like gelato, but I’ve never had that, so I can’t really say firsthand. All I know is that it tasted good. Next I dug into a chocolate croissant bread pudding that was delicious. It was moist and not too chocolatey. This was my favorite of the day. There was a carrot cake gateau that was really great. It had one those flavors that just makes you feel good. I told the people at my table that it reminded me of something from my childhood that I never could quite put my finger on. It had sort of a sweet cornbread texture to it, but I don’t think that was what I was trying to identify. It will forever remain a mystery:) I saved the white chocolate lemon bar for last, because that was the one I was the most excited about, and it was good, but not my favorite. I think I wanted more lemon goo and less white chocolate. 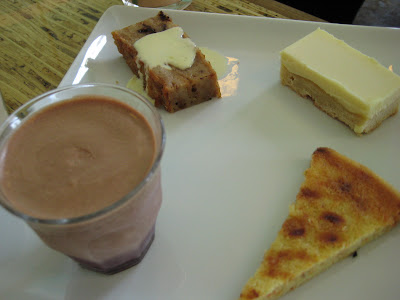 The whole day was great! I won’t make it a habit of eating chocolate for lunch, but it was certainly a wonderful treat.

Hey thar! Nice post on EC. Also, mad props for making creme brulee... Folks like you really inspire me to get off my ass and try to create something good(edible :P ).

It was nice to meet you. I have to agree with the last thing you said. If it were later in the day, I'd feel better about the eating dessert. Lets meet up sometime again!

No chocolate for lunch? I think give all chocolate equal opportunity to be eaten but I agree that the spicy chocolate was one of my favorites.