We had an incredibly lazy weekend where the most exciting thing, by far, was our weekend baking project. This weekend was Brett’s choice and he leafed through The Taste of Home Baking Book, as he always does, and decided on Orange Knots. Brett really enjoys making yeast breads, and this was the first sweet yeast bread that we’ve tried.

As sous chef, I got to work on zesting and juicing and thank goodness Brett bought an extra orange for eating because I scraped every last bit of zest in our entire kitchen! It was a very close call, and we were not about to go back to the store. Mr. Scientist calculated how long to heat milk in the microwave to get it to 110 degrees and it was almost exactly right. He got the dough together, with my flour pouring assistance. We have been very lucky so far, because every yeast dough we’ve made has risen perfectly. This one rose a TON! 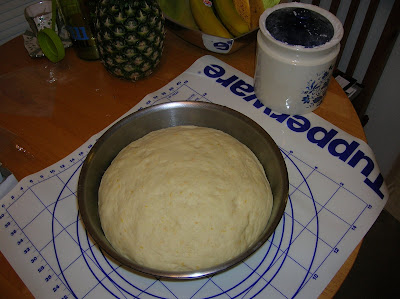 Brett was kind enough to let me punch the dough (I had never done it before) and it was really fun. That's my fist mark! 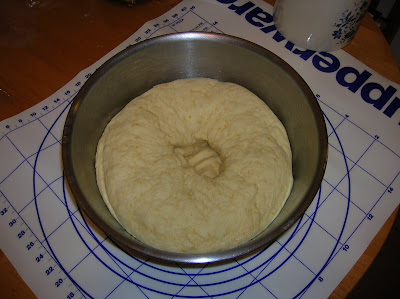 Then we had to roll it out and divide it evenly into rectangle strips. At this point we knew that we were making way too many for the two of us to eat, but it’s kind of hard (or maybe we’re just lazy) to half a packet of yeast. So we ended up with 18 rolls. We literally took each strip and tied it into a knot. It sounds easy but it was pretty difficult to get the knot tight. I mostly just did the best I could in one shot, while Brett stood there and fidgeted with his until they were perfect. The pretty ones are of course Brett’s; mine have more of a “rustic” look to them. 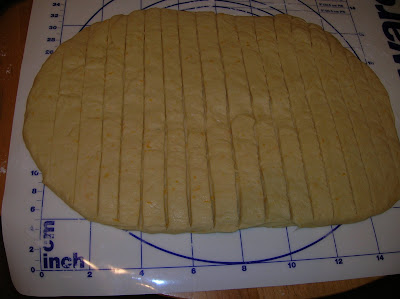 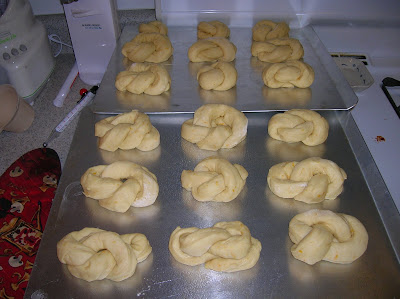 Once the rolls were baked and cooled, we made the orange glaze with orange juice, zest, and powdered sugar and I drizzled it over all the rolls. 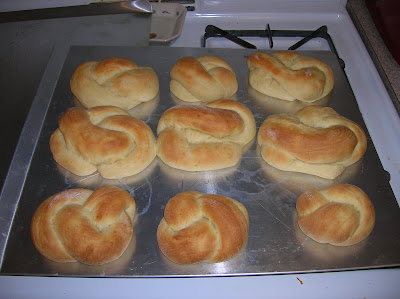 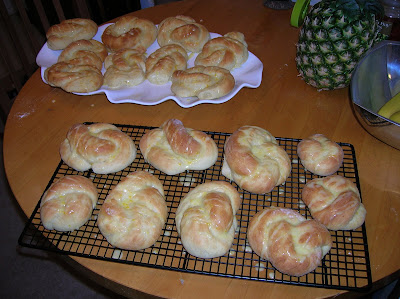 They tasted delicious! Brett particularly liked the glaze. He said that we should have dipped the whole roll in a vat of glaze- doughnut style. I think they were perfect. They were soft and subtly sweet. They reminded me of the Pillsbury orange Danish rolls that my mom used to make, but better and not flaky. I ate two Saturday night and then two more Sunday morning (reheated in the microwave they were awesome.) Brett took a whole bunch to work today so hopefully they were a hit. I hope he told people to heat them up a little before eating them, otherwise they are a bit hard from sitting around for a couple of days. We have two left here for dessert tonight. I’m so happy when our weekend project is a success! 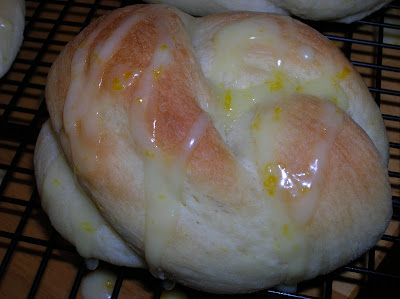 These look so good, Kim. My mouth is watering! I am so impressed with your baking skills (as usual). I don't even think I've ever seen a packet of yeast before, jaja! I love reading your blog!

These look SO delicious! They are so perfectly formed and they made my mouth water just looking at them.

These look SO good. They rose perfectly and still retained their knot shape. Just reading this made my mouth water.

Hey Kim... mmmm... great pictures! You know a picture is great when one can practically taste the item just by looking at a photograph. By the way, how did Brett calculate the rate of heating in the microwave? ;) I was thinking of measuring the temp, heating it for 10 seconds, measuring again, and calc'ing the rate that way (change in heat divided by time)... am I right?

You scientists crack me up! It was much simpler than that I think. I know he tested it on water first, I'm not exactly sure of the details, but when he goes into science mode I generally tune out.

Yum! And I am so hungry. Kneading dough is such a great and fun way to get out aggression. I consider it exercise!

I have that cookbook and I've had my eye on this recipe for quite a while! Since I've been the only one home lately, I'm afraid to bake something like this because I know I'll eat them all myself! ;-)

It definitely makes a lot...18 big rolls! So as long as you have people to share them with, or a place to take them it's great!